The inspirational story behind
“The Senior Song Book™” 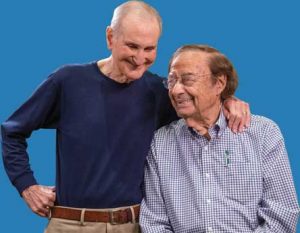 At age 99 Alan Tripp wrote a poem called “Best Old Friends” to celebrate the many new friends he made at Beaumont at Bryn Mawr, the Pennsylvania retirement community where he lives. As a gift for Alan’s 100th birthday, his younger friend and neighbor, 88 year-old Marvin Weisbord, set the poem to music. That was the spark that launched this dynamic songwriting duo, and inspired a whole community to sing, dance and perform along with them.

Alan had long lamented that there was no new music being written for seniors, and he vowed to fill that void. He wrote many more lyrics, imagining how they would sound as show tunes and pop songs – from swing and tango to rumba and rock ‘n roll. Marvin, an accomplished jazz pianist, set the words to music and with his band, the Wynlyn Jazz Ensemble, performed the songs live for their enthusiastic neighbors, and fine-tuned each number to the “swing of the crowd.”

At age 102 Alan decided to take the now substantial collection of songs into the recording studio and produce an album. The result is The Senior Song Book – music that will transport you back to the 1940s, with lyrics written in the 2020s.